Mold A hollow form or cavity into which molten plastic is forced to give the shape of the  required component. The term generally refers to the whole assembly of parts that make up the section of the molding equipment in which the parts are formed. Also called a tool or die.

Moulds separate into at least two halves (called the core and the cavity) to permit the part to be extracted; in general the shape of a part must be such that it will not be locked into the mould. For example, sides of objects typically cannot be parallel with the direction of draw  (the direction in which the core and cavity separate from each other). They are angled slightly; examination of most household objects made from plastic will show this aspect of.

examination of most household objects made from plastic will show this aspect of                                design, known as draft. Parts that are "bucket-like" tend to shrink onto the core while cooling and, after the cavity is pulled away, are typically ejected using pins. Parts can be easily welded together after moulding to allow for a hollow part (like a water jug or doll's head) that couldn't physicallbe designed as one mould.

More complex parts are formed using more complex moulds, which may require moveable sections, called slides, which are inserted into the mould to form particular features that cannot be formed using only a core and a cavity, but are then withdrawn to allow the part to be released. Some moulds even allow previously moulded parts to be re-inserted to allow a new plastic layer to form around the first part. This system can allow for production of fully tyred wheels.

Traditionally, moulds have been very expensive to manufacture; therefore, they were usually only used in mass production where thousands of parts are being produced. 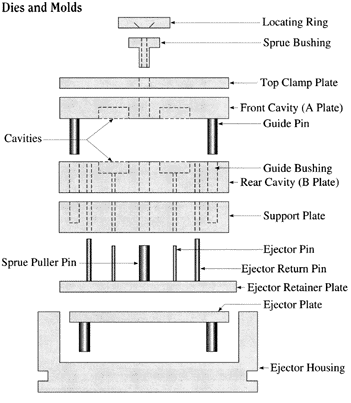 Cold-runner mold Developed to provide for injection of thermoset material either directly into the cavity or through a small sub-runner and gate into the cavity. It may be compared to the hot-runner molds with the exception that the manifold section is cooled rather than heated to maintain softened but uncured material. The cavity and core plates are electrically heated to  normal molding temperature and insulated from the cooler manifold section.

A two plate cold runner mold is the simplest type of mold. It is called a two plate mold because there is one parting plane, and the mold splits into two halves. The runner system must be located on this parting plane; thus the part can only be gated on its perimeter.

A three plate mold differs from a two plate in that it has two parting planes, and the mold splits into three sections every time the part is ejected. Since the mold has two parting planes, the runner system can be located on one, and the part on the other. Three plate molds are used because of their flexibility in gating location. A part can be gated virtually anywhere along its surface.

The mold design is very simple, and much cheaper than a hot runner system. The mold requires less maintenance and less skill to set up and operate. Color changes are also very easy, since all of the plastic in the mold is ejected with each cycle.

The obvious disadvantage of this system is the waste plastic generated. The runners are either disposed of, or reground and reprocessed with the original material. This adds a step in the manufacturing process. Also, regrind will increase variation in the injection molding process, and could decrease the plastic's mechanical properties.

Hot-runner mold - injection mold in which the runners are kept hot and insulated from the chilled cavities. Plastic freezeoff occurs at gate of cavity; runners are in a separate plate so they are not, as is the case usually, ejected with the piece.

Hot runner molds are two plate molds with a heated runner system inside one half of the mold.

Externally heated hot runner channels have the lowest pressure drop of any runner system (because there is no heater obstructing flow and all the plastic is molten), and they are better for color changes none of the plastic in the runner system freezes. There are no places for material to hang up and degrade, so externally heated systems are good for thermally sensitive materials.

Internally heated runner systems require higher molding pressures, and color changes are very difficult. There are many places for material to hang up and degrade, so thermally sensitive materials should not be used. Internally heated drops offer better gate tip control. Internally heated systems also better separate runner heat from the mold because an insulating frozen layer is formed against the steel wall on the inside of the flow channels.

A special type of hot runner system is an insulated runner. An insulated runner is not heated;  the runner channels are extremely thick and stay molten during constant cycling. This system is very inexpensive, and offers the flexible gating advantages of other hot runners and the  elimination of gates without the added cost of the manifold and drops of a heated hot runner system. Color changes are very easy. Unfortunately, these runner systems offer no control, and only commodity plastics like PP and PE can be used. If the mold stops cycling for some reason, the runner system will freeze and the mold has to be split to remove it. Insulated runners are usually used to make low tolerance parts like cups and Frisbees.

Hot-runner mold is much more expensive than a cold runner, it requires costly maintenance, and requires more skill to operate. Color changes with hot runner molds can be difficult, since it is virtually impossible to remove all of the plastic from an internal runner system.